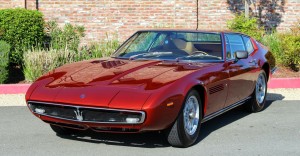 omes to sixties sports cars, most thoughts will turn to the Ferrari Daytona or the Lamborghini Miura, but there was another Italian model which sold in even greater numbers. Despite the shark-like styling of the Maserati Ghibli, the grand tourer never managed to reach the same echelons of infamy as the other style icons of the Italian automobile industry of the era. With a 2+2 layout and the option of a convertible roof, it proved to be the most popular Maserati since the company withdrew from competitive motorsport in the fifties.

Débuting at the 1966 Turin Motor Show, the Ghibli (also known as the Tipo 115) design was of relatively inauspicious origins. With a distinctly pointed nose, kept low along the ground, the steel-bodied model was imagined by Giorgetto Giugiaro, later to be named the car designer of the century. As one of the first additions to what would become an impressive portfolio, the future member of the Automotive Hall of Fame was working as a coachbuilder while designing what would become a future classic.

For many people, however, cars are nothing without power. In that regards, the Maserati did not disappoint. With 310bhp in the earliest version and a 0-60mph time of under seven seconds, the numbers might not seem as stunning today but would certainly turn heads at the time. The 154mph top speed made it an ideal tourer for long journeys along various European coastlines. While the Ghibli was certainly swift, the fuel consumption might well have caused concern in this more environmentally-conscious age. To try and combat this, the manufacturer fitted two fifty litre fuel tanks, with the chance to top up on either side of the vehicle. With the design lines in mind, the headlights popped in and out. Alloy wheels and specially fitted leather seats aimed to deliver comfort to the driver and passengers. While theoretically fitting four, those sitting in the back might have found themselves short on leg room.

The Maserati Ghibli was such a success that it led to a series of cars bearing the same name. Released three years after the original début, the SS version (otherwise known as the spider) brought more power and the option of lowering the roof. The name was also resurrected twice, once in 1992 for bulky model lacking the finesse of the original. The second return, in 2014, marked a return to the svelte lines and luxury which made the original such a success.