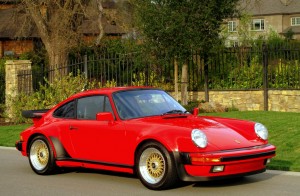 Introduced in 1975, the classic Porsche 911 Turbo for sale is one in a long line of what is arguably the royal lineage of sports cars.

First built by German automobile manufacturers Porsche in the early 1960s, the classic Porsche 911 for sale is the Porsche flagship model. The 911 has gone through many different designs since its initial introduction, but has never varied far from the basic concept of a high performance, rear-engine sports car, with its trademark independent rear suspension. Its long body with a lean-back cab is iconic in the world of domestic and professional sports cars, and is even more so when bought in its signature racing red colour.

The Turbo was – as the name suggests – the first turbocharged model in the 911 series. Its initial 3 litre engine (2.1 and 3.3 litres were also produced) provided an extremely powerful acceleration for cars of its time. The Turbo gained a reputation for being something of an unruly stallion, known for its challenging handling and slow throttle response (attributed to the massive power erupting from the turbocharger.)

A racing model of the Porsche 911 Turbo for sale was also produced – the Porsche 934 – but these are now extremely rare, as they were only produced for two years. Both this and the regular 911 Turbo won numerous championships around the globe – most notably the Le Mans race in 1979.

Most importantly however, is the legacy that the 911 Turbo left for the rest of the series that would be published by Porsche over the years. The introduction of the Porsche 911 Turbo in the 1970s, and the popularity and variants that it led to, meant that there was a Turbo edition created for every subsequent model of the 911, as well as Turbo editions of many other Porsche vehicles as well.

Whilst the Porsche 911 Turbo may now seem outdated by more recent sports cars, it represents an important part of motoring history, and is a car that would surely pride the garage of any classic car collector.