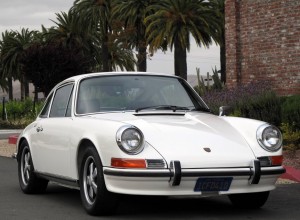 The classic Porsche 911E is the go-to choice for anyone who wants a sports car that combines great manufacture and classic design.

Since its introduction in the early 1960s, the classic Porsche 911 for sale has been the flagship Porsche series. The 911 series has seen many different changes and variations over the year, but none of them depart from the core idea of the 911 – a two-door, high-end sports car, with reliable Porsche interior and an iconic laid back design. Produced between 1971 and 1973, the Porsche 911E for sale was one of the most popular 911 models of the time.

In the early seventies, most models of Porsche 911s were produced in three types – the cheaper 911T model, the middle range 911E, and the 911S – a top of the range with all the bells and whistles. The 911E (The ‘E’ of which stood for the German word for ‘Injection’ – Einspritzung) was, as expected, the most popular model by far.

Whilst there were small differences between the T, E, and S models, all three saw a huge improvement in engine power – all three are fitted with the same 2.4 litre 2,341cc engine. The model also – as the E for ‘Einspritzung’ name suggests – took advantage of mechanical fuel injection, an advancement that could also be found in the 911S model. Other technical improvements in the series included huge adjustments to transmission, and gear layout. In the second year of its manufacture, Porsche also aimed to improve the handling in the car, after many complaints of over steer from the rear-mounted engine in early models of the 911. In an attempt to remedy this, Porsche moved several parts within the car around, in order to improve weight distribution.

The design of all three types is also reminiscent of early 1970s design. Whilst many vehicles of the time concentrated on creating a futuristic aesthetic in their cars, the Porsche 911 series of the early 1970s stuck with what it knew best – curved fenders, a long bonnet, and the signature leant back look. It is a look that has aged well, leaving any current collector with a 911E with a car of serious style.

The Porsche 911 series, for all its changes and surrounding myth, is a slice of motoring history. The classic Porsche 911E for sale is typical of this – a true slice of quality made, stylishly built, vintage machine, that any self respecting collector would be proud to own.