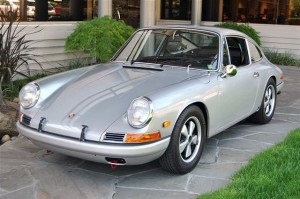 The classic Porsche 911L for sale is one of the rarest vehicles on the classic German sportscar market. Unveiled in 1967 and released a year later, the model wasn’t in production for very long. There are conflicting reports on how many were manufactured, but conventional thinking is that less than 450 rolled off the production line.

Due to emission laws, the legendary 911S was banned from shipping to the US, meaning many of the few 911Ls made were shipped across the Atlantic instead. How many are still remaining on the road is unclear, but those that are around have generally been restored by enthusiasts keen to bring back the vehicle’s original glory.

The meaning of the letter L is also the subject of some debate, with some Porsche fans believing it stands “Luxe” or “Luxury”, while others have referred to it as “Lexus” or even “Late mode”.

What is for certain is that it is one hell of a car. Boasting a top speed of 131mph, the car’s engine size was 1991cc with maximum power of 130bhp. It came with either a full five speed manual gearbox or a four gear semi-automatic system known as “Sportomatic”.

Forming part of the German firm’s A series, the vehicle retained the general appearance of previous models, but included some minor tweaks and changes. One of the first noticeable differences is the windscreen wipers. On the early 911s these were polished, but for this 1968 model the designers favoured a black finish.

The door handles were also redesigned to include recessed buttons, while the door mirrors were increased in size.

There were changes inside the car as well. Butzi Porsche, creator of the 911, had wanted all his vehicles to have black dials with chrome bezels, but was talked out of the idea by his design team who favoured a finish in silver. But with the Classic Porsche 911L, he got his wish.

Brushed aluminium was used as the dashboard trim instead of wood and black metal was added to the wheel trims. At the rear, the car’s Targa was made of fixed glass rather than folding plastic, greatly improving visibility.