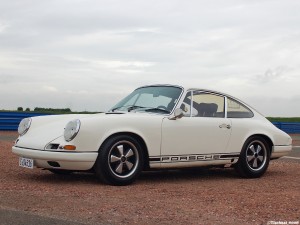 There are few marques with a better competition pedigree than Porsche, and the classic Porsche 911R for sale was the epitome of the company’s motorsport focus when it was developed in the late 1960s. Designed wholly as a race version of the already popular production model, the 911R was designed with one aim only in view – to be the best quality Porsche race car available.

The 911R was engineered to be as light as it was possible to be. The monocoque was crafted from steel that was as thin as possible, with fibreglass being used for the panelling. Even the door hinges were made of lightweight aluminium. The cabin was a triumph of sparsity: Scheel racing seats and a minimal three gauges. Plexiglass replaced all glass and the floor was drilled to save weight. In all, the 911R weighed in at nearly 500lbs less than the equivalent production model in competitive motorsport.

For competition, the brake calipers were larger and the the 911R ran on wider wheels and tyres than its road equivalent. The wheel arches were flared slightly to accommodate this. The 210bhp, two-litre 901/22 flat six power unit was similar to the unit in the 906 (Carerra 6).

Although designed to be an ‘off the shelf’ factory-built racing platform, only 24 were finally built, with 20 of these cars being made available to privateers. The car made its race début in July 1967 at Mugello in a 500km sports car race. Driven by Vic Elford and Gijs van Lennep, it performed well, finishing third behind two Porsche factory-supported 910s. The 911R found its first race win later that year when Vic Elford, Jochen Neerpash and Hans Herrmann piloted it to victory at the Marathon de la Route, the 86-hour endurance event held at the Nurburgring. The model went on to score successes in a number of events.

Despite these successes, the model was never destined to go into full production as the market for target sales of 40 units per month was not deemed to be realistic. The small number of Porsche 911Rs that continued to be run by privateers met with mixed success.

The classic Porsche 911R for sale is one of the rarest and most desirable 911 derivatives, and is unique in that it was the very first 911 that was built specifically with competition in mind. Given the very limited numbers produced, it is very unusual for one of these very distinctive and important models to be found on the market.