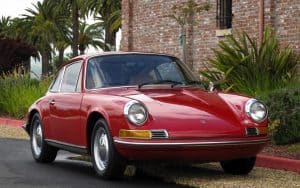 The classic Porsche 911T for sale was an entry level 911, with 110bhp, a 2000cc 6 cylinder engine, with a semi-automatic three speed gear box. It has a top speed of 124mph and does 0-60mph in 8.3 seconds. It shares the attributes for which the 911 is famous: rear-mounted engine/rear wheel drive, two doors and four seats, great styling and a compact shape. It is fast and nimble, with the distinctive Porsche engine roar. It has centrally mounted pedals, positioned to the left and hinged, so that you have to bring your knee up to press down on them. This can feel strange at first, but is something 911T drivers soon get used to and after a short time 911T owners report that the pedals position feels the most natural thing in the world.

If you want to buy a pre-1973 Porsche 911, like the 911T, bear in mind that these early models don’t have power steering, however, they have lots of character and are great fun to drive.
The Porsche 911T is a collectable car, but there aren’t many still around. Those that are for sale are likely to have been restored at some point, as pre-1973 Porches often rusted. The classic Porsche 911T for sale is not as highly powered as other 911s available. After 1969 Porsche introduced longer wheel bases to its 911s, to improve handling. Pre-1969 short wheel based 911s are today more expensive than the long wheel based versions. Prices for all 911s are expected to climb as we move out of recession.