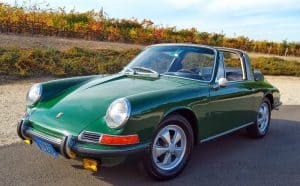 Naming a legend is not easy, and creating one is even more difficult. By the early 1960s the Porsche 356 had attained huge success with more than 70,000 units sold, so it would seem creating a legend seemed easy for the German company. The car however, was getting outdated, so it was time for a whole new one, resembling the general 356 philosophy, but introducing a number of innovations and styling and technical modernizations. The car was the classic Porsche 911.

The number-naming trend in classic Porsches for sale at the time came from project design numbers and by the time the future 911 was ready to appear, it was well into 800s. This is why the future legend was presented as the Porsche 901 at the 1963 Frankfurt Motor Show. Production started the following year and the 901 had already been sold when it appeared at the Paris Auto Salon in October 1964. This is where French manufacturer Peugeot, who had exclusive rights to the three-digit-with-a-zero-in-the-middle naming in France, became aware of what Porsche was doing. After complaints from Peugeot, Porsche chose to rename the model, changing the problematic 0 to 1, not only in France, but for the rest of the world as well, and the legendary name was born. However, the first 82 Porsche 901s were made by that name and they retained it.

All other Porsche road cars with a zero in the middle were affected as well, so the 904 became the Carrera GTS – another name that survived to this day – and the 906 became the Carrera 6. Racing-only cars kept their names, due to the fact that Peugeot used the zero only for their road cars.

Thus Peugeot became responsible for indirectly naming one of the most famous sports cars in history – the Porsche 911 – and also one of its variants – the Carrera GTS.