007 and Aston Martin – an Ongoing Connection 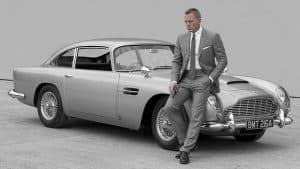 James Bond can drive anything he desires. The British secret agent has an impeccable organization behind him, dedicated to keeping his style, efficiency and elegance in order and a car he is driving is a big part of it. It was expected that he would be driving a British car and his relationship with Aston Martin seems to have built itself on its own.

It was Ian Fleming’s seventh novel called Goldfinger where James Bond first sat into a classic Aston Martin. The car in question was the DB3, which was understandable having in mind that the novel came out in 1959. However, by the time the movie Goldfinger was out in 1964, the DB5 was already out and going strong, so the producers decided to go with the more modern legend and this was a winning move.

Sean Connery, one of the most appreciated and, many would say, the best Bond actor, was smooth, handsome, but also capable and deadly, so combining him with the DB5 was an easy choice to make. The DB5 has since proved the most present Bond car, appearing in several movies, including some recent ones.

The DB5 was there again in Thunderball a year later, boasting several other deadly optional features, understandably unavailable in production cars, such as a water cannon and a jetpack. However, few additions have reached the fame of the launching passenger’s seat from the previous movie.

The next installment in the Bond series saw a change in actor, George Lazenby having his only feat, but Aston Martin was there to stay, albeit in the form of the DBS in On Her Majesty’s Secret Service in 1969.

After this movie Roger Moore became 007 and he did not drive an Aston Martin in any of his films, but the famed manufacturer returned in 1987 with Living Daylights where Timothy Dalton enjoys the roars of the V8 Vantage, again packed with additions like wheel spikes and even a rocket launcher.

Still, the most notable Bond car was the DB5, so it is no surprise that it returned as a classic in 1995, more than 30 years after its first appearance. The movie in question was GoldenEye with Pierce Brosnan as James Bond and the movie opens with a race of the DB5 with the Ferrari F355. The return of the DB5 was a successful move, so it reappeared in 1997’s Tomorrow Never Dies in several scenes.

Brosnan stayed faithful to Aston Martin, driving a V12 Vanquish in Die Another Day in 2002, which was an understandable jump to modernity in the new millennium thrilled with hi-tech features like a disappearing cloaking device.

Modern Aston Martin DBS V12 was also present in Casino Royale and Quantum of Solace, but the former also featured the untouchable classic DB5, which Bond won in a poker game.

After two side appearances in modern films, the DB5 again took the leading car role in 2012’s Skyfall, 48 years after its remarkable debut, showing true value of the elegant classic.

In Spectre, Bond drives an Aston Martin again. The stunningly modern DB10 helps 007 here, but as retro hype reappears, we could easily expect the DB5 again. And, no, Bond producers, it did not bore us.