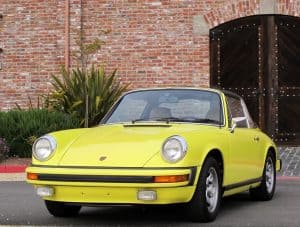 Meaning “plate” in Italian, Targa refers today to any car with a detachable roof and full width roll-bar across the rear seats. While this term can describe any car, it belongs to Porsche; literally, the company still own the copyright. In 1967 Porsche developed the Porsche 911 Targa for sale, named rather fittingly after the Targa Florio race held outside of Palermo, Sicily; an endurance test at which Porsche excelled in their formative years, right up until 1973, defeating rivals Ferrari and Alfa Romeo. While the detachable roof style was found in other cars (such as the Triumph TR250) prior to this release, the design is synonymous with the Porsche. The roll-bar was included as designers feared that US regulations would require such a safety feature. One can be thankful then to the designers for such commercial awareness given the aesthetic effect the roll bar has on the model. In ’67 three models of Targa were offered by Porsche. The classic Porsche 911S for sale offered a 2.0 litre engine, giving 160bhp, improving dramatically on previous models’ power output. The 912 four-cylinder and the 911 base model were also offered, but only boasted 130bhp and lower acceleration rates. The engine size of 911 Targa models increased to 2.4 litres in the 1970’s, with subsequent improvements in performance, aided by the introduction of mechanical fuel injection and developments of the chassis over the lifetime of the model. The pre-1974 Porsche 911 Targa for sale is a powerful machine even by today’s standards. The seats are certainly representative of their time; but it is the flat, shapeless seats that give the car so much feeling. The steering is incredibly responsive, and being in such a small car heightens that sense of fluidity. The lower speed and power compared to many modern cars is more than made up for by this effect, similar to that felt when driving a modified classic Mini, but of course immeasurably better. Needless to say, of the models that were made in the Targa style, it is the earlier cars that are rarest. The hot-dip body, which countered the corrosive problems experienced in many cars of this era, was not introduced until many of the 1967 models had already suffered serious damage. As such, a ’67 Targa in as-new condition is a rare sight indeed. The market for all pre-1974 Porsche 911 Targa models for sale is excellent, but a restored or preserved pre-1969 is a real treasure. The market is healthy for both buyers and sellers, and exchanges would always be happy to list a 911 Targa.