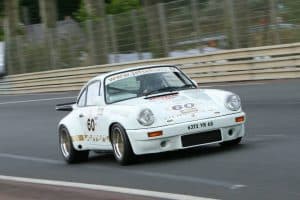 Porsche 911 RS For Sale: A History

The history of the Porsche 911 RS is not so much the tale of a diamond in the rough as it is a story of the cream rising to the top or of the purest among the pure. The classic Porsche 911 was, from its inception, designed to cater to the needs of the sports car enthusiast and is believed by many Porsche enthusiasts to be the greatest Porsche model ever produced. The RS, which means Rennsport in German and Racing Sport in English, model of the 911 went a step beyond appealing to the typical sports car enthusiasts and ventured into the realm of the pure racing enthusiast.

With the executive board members of Porsche overriding the objections of the automaker’s top sales personnel, the 911 RS was unveiled at the 1972 Paris Salon Auto Show.  Initial plans to build only five-hundred of the 1973 Porsche 911 RS model fell short when all were sold within a week and steps were taken to produce five-hundred additional units. Upon completion and sale of the first one-thousand cars, Porsche was eligible to file for Group Three homologation status for the RS. This would afford Porsche the luxury of using the RS name in various racing venues, attracting more attention and garnering a greater following among both racers and regular consumers.

The 1973 Porsche 911 RS for sale is an adaptation of the popular 911 S, which was introduced as a 1966 model. The most dramatic variation between the RS model and the S model involves the respective power to weight ratios of each. The RS model was constructed using body panels which could not exceed .7mm in thickness, whereas the S model body panels were generally over 1mm thick. Additional weight reduction modifications included the use of fiberglass in construction of the engine cover and rear spoiler, lightweight Glaverbel auto glass and windows, and the removal of many interior components. Rear seats were out and the front seats were replaced with lightweight racing seats; the glove-box, clock, and passenger sun visor were also removed. Bulky extravagant door panels and trim were replaced by lightweight basic vinyl panels, which used a strap latch release and lightweight window crank handle (power windows were deleted, as well). Even the exterior undercoating and most of the interior soundproofing were removed and the Koni brand shocks were replaced with lighter Bilstein shocks. Lighter and faster, equals better and the RS models were typically over 200-pounds lighter than their S model counterparts.

In addition to the weight reduction of the RS version, it also featured a more powerful engine. The 1973 version was equipped with a reconfigured 2.7-liter which produced 210-horsepower and 188 lb.-ft. of torque. A radically enhanced valve timing platform and mechanical fuel injection enabled the RS model to boast a power to weight ratio of just over 10-pounds per base-horsepower.

A stiffened suspension and larger brakes completed the performance package.

Today the classic Porsche 911 RS models for sale from the 1970’s are some of the most valuable and sought after classic cars in existence.