Classic Porsche 911 For Sale – The Evolution of a Masterpiece 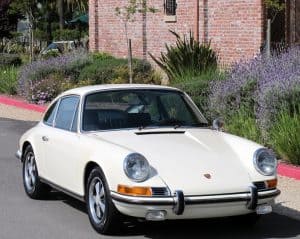 If you ask someone to think of a Porsche, likelihood is that they’ll think of a Porsche 911. The lineage of the model is impressively long, acting as the flagship Porsche for over half a century. But it is the classic Porsche 911, only made for the first 10 years of production (from 1963-74), that still grabs the eye today.

The original Porsche 911 was developed as a successor to the 356; Porsche’s first model of car and a much smaller, less powerful machine overall. Plans to name the replacement the 901 were thwarted by Peugeot, who claimed copyright over 0 in the middle – and forcing Porsche to use the now classic moniker.

The transmission was first improved to match the newer, more powerful engines. That meant the old ‘dog leg’ transmission was removed (a key difference between pre and post-1972 models), and replaced with the standard ‘H’ layout familiar to most modern drivers. Reasons for this change are up for debate, with some believing it was to make the car better for city drivers and some favouring the opinion that it was for better race performance.

Most importantly, though, this was the time when Porsche put in the most effort to improving the 911’s handling, and rectifying the oversteer issues that come with placing so much weight over the rear axle. Moving the oil tank forward and adding a spoiler to the front of the car were just some of the methods attempted.

It worked, as the 1973 models of classic Porsche 911 for sale are the most sought after in the classic car market. Any collector willing to look beyond that particular year shouldn’t have too many problems, however, as the popularity and success of classic Porsche 911s means that there are usually plenty on the market.