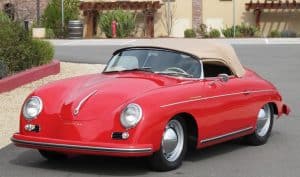 During his life Max Hoffman, Austrian born importer of European cars into the U.S., was well known for his “handshake-deals.” Today, he is not only recognized as a man of integrity, who firmly kept his word, but also as an automotive marketing genius of astronomical proportions. It was Max Hoffman, who operated out of a showroom on Park Avenue in New York City, which convinced Ferry Porsche and the executives at Porsche that a more economical and less pretentious version of the 356 could improve sales in the U.S. Hoffman, who accounted for about one-third of total Porsche 356 sales worldwide, realized that British sports cars were dominating the American market. At that time, Jaguar, Austin-Healy, Triumph, and MG, offered sports cars and convertibles which were much less expensive than the Porsche 356 Cabriolet or Coupe (which was $300 more expensive than a Jaguar XK120 for sale). Maxx suggested that a racier, stripped down version of the Porsche 356 for sale, which could be sold with a sticker price of less than $3,000, would be more effective at penetrating the American sports car market. Porsche agreed and so the Porsche 356 Speedster was born.

The Porsche 356 Speedster would be manufactured on the same production line as the 356 Coupe and Cabriolet, then outfitted with a focus on minimizing weight and cost. Three-and-a-half-inches were removed from the front windscreen to give the Speedster a more raffish appearance; the windscreen could easily be removed for racing events. A thinner folding convertible top took the place of the extravagantly padded tops of the Cabriolet model and side curtains replaced roll-up glass windows. The exterior of the Porsche 356 Speedster for sale was identical to that of the Cabriolet, with the exception of an appealing full-length side strip which seems to “shoot” directly through the door handles. The Speedster interior was scant, as well; with lightweight bucket seats that did not recline and only a speedometer and engine temperature gauge offered as instrumentation.

As advertised, the Porsche 356 Speedster for sale proved to be very popular in the U.S., especially on the west coast in sunny southern California. The 1954 Porsche 356 Speedster (Pre A) was equipped with a 1500cc engine and four-speed manual gearbox. Engine options were limited to either the 1500 Normal (N) or 1500 Super (S) the latter of which cost $500 more and was slightly more powerful. Despite the more economical price and the notable absence of many extravagant amenities, critics found the Speedster to be very well made. Previous Porsche 356 models were known as high-quality automobiles and the Speedster certainly continued in this tradition.

Introduced in late 1955, the Porsche 356A Speedster (Type 1) was essentially a brand new chassis underneath a strikingly similar body. The Volkswagen front suspension was replaced by a new Porsche design with adjustable leaf torsion bars, along with heavier shocks and anti-sway bar. The rear suspension was improved, as well. The VW steering gear box was replaced by a newly designed “worm and peg” gearbox, which reduced the number of turns from lock-to-lock and the overall turning radius. A new 1600cc Normal and Super engine were added; with 60-bhp and 75-bhp, respectively. Cosmetic changes included “tear-drop” taillights, bumpers, and wider 15-inch wheels.

The most popular and attractive Porsche 356 Speedster for sale is believed to be the Type 2 (T2) 1958 model. With Speedster sales tapering off in the U.S and consumers clamoring for a more protective cockpit, the Porsche 356A Convertible D would replace the Speedster in 1959. Cosmetic changes were almost non-existent for the 1958 model year, with the exception of the exhaust pipes being routed through the rear bumper guards and chrome-plated hubcaps with the Porsche emblem affixed in the center (standard on the Super cars). Engine choices remained the same as in 1956.