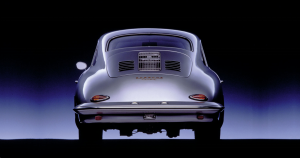 The legendary Porsche 356 was born of necessity, according to young Ferdinand Porsche, Jr., for lack of an adequate sports car for sale at any price. Porsche began producing the 356 model in 1948 and continued until 1966, garnering a loyal following of racing and driving enthusiasts along the way.  One of the most popular and expensive variations on the vast Porsche 356 for sale menu, the Carrera models were built for speed. Equipped with the racing inspired dual-overhead-cam (DOHC) racing engine which had gained recognition in the Type 550 race car, the Carrera was named after a famous Mexican Road Race, the Carrera Pan Americana. The Type 550, equipped with a version of the DOHC Carrera engine, distinguished itself valiantly in these races during 1953 and 1954.   As adequately refined and critically lauded as other 356 models were, the Porsche 356 Carrera GT for sale was every bit a race car.

The popular Carrera models were introduced for public sale late in 1955. The inaugural offering of the DOHC engine equipped 356 was available only as an original 1500GS Carrera; in Coupe, Cabriolet, or the wildly popular Speedster version.

May of 1957 gave way to a new Porsche Carrera, of sorts. Again available as a Coupe, Cabriolet, or Speedster, the DOHC engine equipped high-performance Carrera was now offered in either a Deluxe or GT package. The Deluxe, much like the original Carrera, was outfitted with “street trim.” The Cabriolet Carrera was offered in the Deluxe package, only. Street trim basically included a gas heater and fresh-air inlet, along with standard glass and body panels and a slightly detuned engine.

Available for the 1957 and 1958 Porsche 356A Coupe and Speedster models was a new GT package. Equipped with a twenty-one gallon fuel tank, a Spyder-type brake upgrade (from 115 square inches of lining to 128 square inches) and worm-gear type steering, as well as lightweight plastic windows and lightened bumpers, the Porsche 356 Carrera GT for sale was truly a car built for the track. In 1958 further weight reductions included aluminum doors, hood, and engine cover along with lightweight aluminum framed bucket seats, which offered the driver added support. The GT package also deleted the heater and had no undercoating. The total weight reduction amounted to 150-lbs. for the Coupe and 100-lbs. for the Speedster. The 1500GS was redesigned with oil clearance main and rod bearings, twin-oil-coolers with tubing, crankshaft distributor drive, Solex P40-II carbs (Weber carbs were optional) and a high-performance exhaust. GT package engine upgrades netted an increase of approximately ten-horsepower, giving the 1957 Porsche 356 Carrera GT model a total of 110-bhp.

1958 Porsche 356 A Carrera GT 1600GS engine modifications included a cubic-inch increase, a special exhaust system with a free-flow muffler, higher compression ratio, twelve-volt electrical system, sodium-cooled exhaust valves, and a pair of Weber 40DCM2 carbs. A dual-distributor ignition system was also devised; it was comprised of a distributor which was driven by each intake camshaft. Total output for the 1958 Porsche 356 Carrera GT was 141-bhp.

With the introduction of the 356B, and sales of the Carrera model declining, Porsche offered only a Porsche 356B 1600GS GT Coupe for sale from 1959 through 1961. These cars were stripped down versions with a focus on racing as their primary purpose.