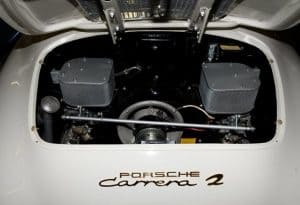 Porsche, building on over five successful years of 356 Carrera production, introduced the 2000GS (also known as the Porsche 356 Carrera 2) at the Frankfurt Auto Show in the fall of 1961. As the most powerful mass-produced Porsche 356 for sale to date, the Carrera 2 gained instant popularity.

At the heart of the Porsche 356 Carrera 2’s popularity was the famed Type 587 racing engine. Expanding on the 1600cc 547 Carrera racing engine base; the Carrera 2000cc engine featured a longer stroke with a larger bore. The 2.0-liter Dual Overhead Camshaft (DOHC) Porsche boxer racing engine was equipped with twin Solex P 40II-4 carburetors. Twin distributors, mounted on the ends of each camshaft, provided dual spark to plugs in both banks, sequentially. Oil clearance rod and main bearings, similar to those found in the 1600GS, were used in the 2.0L instead of the roller bearing systems which were found in earlier Carrera models. The new bearing design necessitated a higher degree of oil cooling. This was accomplished via increased oil capacity (10.5-quarts) and remotely mounted oil coolers with steel-braided return lines. An inline thermostat properly restricted oil flow. The 2000GS continued to utilize a large, engine-driven cooling fan, capable of moving in excess of 1,000 liters of air per second at higher RPMs. Still rear mounted and air-cooled, the 2.0 produced 130-bhp and 119 lb.-ft. of torque, with a top speed of 125-mph and a 0-60 mph time of 10.8-seconds.  The gear ratios in the four-speed manual transmission were tweaked slightly for the Porsche 356 Carrera 2 for sale as well. Taller final drive gear ratios in cars exported to the U.S. resulted in a better launch from stop and improved top-speed, which sat very well with consumers.

Exterior differences between the Porsche 356B and 356B 2000GS were few, but significant. Exhaust tips exited through a specially designed protective apron, which was well ventilated, painted body-color, and hung underneath the rear bumper, instead of through the rear bumper and bumper guards. Additional cooling vents were added to accommodate the higher engine temperatures generated by the new bearing design. The Carrera engine option was offered in Coupe, Cabriolet, Roadster, and Karmann Hardtop versions, outfitted with Deluxe or GT packages.

Interior changes in the Porsche 356 Carrera 2 for sale included more comfortable Reutter seating and a fresh-air intake with heater fan. Air temperature was increased by using an optional gasoline powered heater. Critics called the climate control system “innovative.” As advertised, overall interior quality was rated as extraordinary by automotive critics of the day.

In typical 356 fashion, the Carrera 2 seemed to stick to the road during hard cornering, bearing down still harder upon acceleration. Steering was stiff but responsive and ride quality for the Carrera 2 was improved over earlier models, with less vibration. The four-wheel Dunlop disc braking system, which was added to the 1962 Porsche 356 Carrera 2 in mid-production, completed the package providing more than adequate stopping power for the perennial sports coupe. 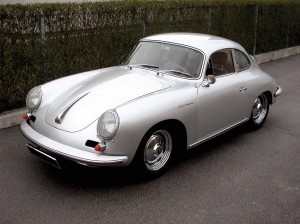 The 1963 model year saw limited modifications. Racing focused options continued to abound. Among them were a larger fuel tank, various weight-reduction components and techniques, and a limited-slip differential. Porsche made no apologies for the fact that the Carrera 2 was geared towards the driving enthusiasts.