The instances of a car becoming known for the engine by which it is powered are rare. Only the most innovative and powerful of engines receive this sort of recognition. The “Hemi-Cuda”, the “LS6 Chevelle”, as well as the Porsche 356 Super 90 for sale all possessed this type of engine. Available for only three years, the Super and Super 90 models were available as a 356B Coupe, Cabriolet, Roadster, or Karrman Hardtop.

Since 1948 Porsche produced top-tier sports cars which had, by all practical accounts, evolved into the state-of-the-art performance driving machine, known as the 356B. Garnering many wins in various racing endeavors, worldwide, the Porsche 356 for sale had earned the respect of the automotive racing community and drawn a level of consumer interest which exceeded expectation. Some automakers would leave well enough alone and continue with the same proven design which had worked in previous models. Choosing not to rest upon their laurels, Porsche opted to enhance its most powerful engine option and “push the envelope.” The decision paid dividends which are still talked about in automobile enthusiast circles today. 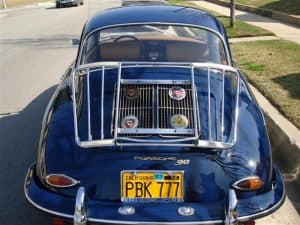 Internally known by the number 616/7, the Porsche 356 Super 90 for sale was designed with a higher rev-capacity than the previous 356B model 1600cc engines. The counterweighted crankshaft, along with camshaft and bearing surfaces, were treated with Nitride for a greater degree of hardness to help them stand-up against the rigors associated with higher RPMs. A lightweight flywheel and larger diameter crankshaft main bearing journals further served to strengthen the lower end and decrease engine vibration at high RPM. Cylinder walls were fashioned from cast iron and coated with Ferral, which is a coating consisting of steel and molybdenum.

All of the available 1600cc engines were fitted with an updated oil pump-pickup. The new design ensured that oil would be supplied to the engine, even during hard cornering and at extreme angles. The new oil pump supply design was especially valuable in the Porsche 356 Super 90 and with the racing community.

The dual carburation system was updated, a well. A set of French-made Solex 40 PII-4 carbs, similar to the units with which the Carrera racing engine was equipped, were used. The Solex carbs could be problematic, and many were replaced with Weber carburetors, which Porsche furnished free of charge as long as the new-car warranty remained in effect. All totaled, the performance upgrades netted the Porsche 356 Super 90 (616/7) engine 90-horsepower at 5,500 RPMs.

The Porsche 356 Super 90 for sale was also equipped with Koni shocks all the way around. Slightly wider, shorter tires and wheels gave the Super 90 a more aggressive stance and a thinner rear torsion bar helped to improve roadability at high-speeds. A device which became known as a “camber compensator” served to stabilize the front suspension of the 356, which earned sterling handling reviews from automotive critics. 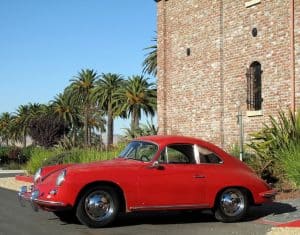 Porsche 356B For Sale Normal Engine

In addition to the Super 90, which was equipped with the 1600cc S90 engine, the 356B Normal was also available. It was fitted with a 60-horsepower detuned version of the 1600cc.

Porsche 356B Super For Sale Engine

The third option was the 356B Super. It was equipped with the 1600cc mid-range engine. The Super engine produced 75-horsepower at 5,000 RPMs. It is sometimes referred to as the Super 75, due to the horsepower output.

The Super 90 suspension package was also available as an option on the Normal and Super model Porsche 356B.