The History of the Porsche 356SC For Sale 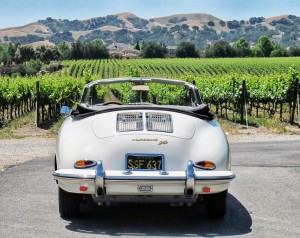 The final version of Porsche’s beloved 356 sports car was introduced in 1963, as a 1964 model. As a continuation from the 356B model, the Type-6 body configuration presented very few new modifications. From an exterior appearance standpoint, only a flatter hubcap design and larger backlight (on the Coupe) were noticeable. Interior enhancements were limited to a redesigned heater control lever and slightly more ergonomic front seats. The Porsche 356C for sale did, however, have some surprises in store. The sixty-horsepower Normal engine was discontinued, the seventy-five-horse engine was renamed the 1600C, and possibly most auspicious of all, the Super 90 was renamed the 1600SC. The 356Cs that were equipped with the new SC engine were appropriately tagged as either a Porsche 356SC or Porsche 356SC Cabriolet for sale. Cars which bear the SC emblem, which is normally located at the end of the Porsche emblem on the engine cover, are extremely collectible and greatly valued, even today. 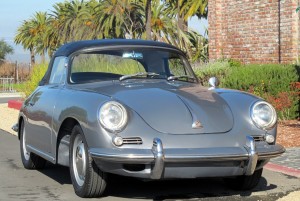 The Porsche Super 90 for sale, so named for its production of ninety-horsepower, received some major enhancements; yielding an increase of five-horsepower, as well as more torque. More efficient air induction, improved heat dissipation, and updated carburation are among the improvements that made the 1600cc SC engine a state-of-the-art power-plant, in its day. A redesigned cylinder composition helped to keep the 1600SC cool. The Feral cylinder coating, used in production of the Super 90 engine, was dropped and a more economical Beral coating took its place. The cylinders of the SC engine were constructed using a cast iron sleeve surrounded with a finned aluminum housing. The finned design of the housing performed well as part of the air-cooled engine. It slowed air-flow, as it swept over the cylinders, and allowed for more efficient heat dissipation. Compression was increased to 9.5 to 1, primarily using smaller intake valves and larger exhaust valves. The dual carburation set-up was upgraded using a set of Solex PII-4 carbs, which provide added air-flow at higher RPMs. Solex, a French made carburetor had been used extensively in the production of Volkswagen cars. SC cars which were exported to the U.S. featured an improved air-flow design and a positive crankcase ventilation system. 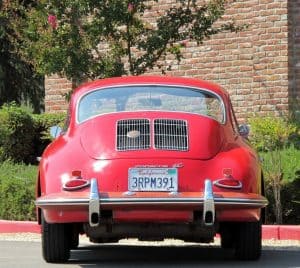 The 1964 and 1965 model classic Porsche 356SC cars for sale were the mid-range package for the 356 model, with the seventy-five-horsepower 1600C equipped version underneath, and the Carrera dual-overhead-cam-engine equipped cars above. Cabriolet models of the Porsche 356SC for sale were fitted with luxurious padded tops, as well as all of the other available amenities.

In addition to the ninety-five-horsepower 1600SC, the Type 6 Porsche 356SC for sale was equipped with a Dunlop four-wheel disc brake system. Although Porsche designed a four-wheel disc braking system in house, they opted to use the more economical Dunlop system, in an effort to improve their bottom line.