Porsche 356C For Sale- The End of An Era

A year-by-year history of the Porsche 356C For Sale

In the ever evolving automotive culture, vehicle models come and go. In the case of the Porsche 356, its gradual departure is viewed as more of a “passing of the torch”, to the more modern and powerful Porsche 911 models. The  Porsche 356C for sale was produced during 1964, 1965, and 1966 (ten ’65 model units), and offered as either a Coupe or Cabriolet. 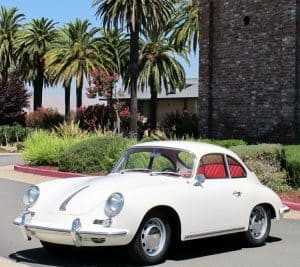 Exterior changes for the “C” version were minimal, leaving the appearance virtually identical to that of the “B”, with the exception of flat-faced hubcaps and a larger backlight, for the Coupe.

Inside, the front seats were slightly more ergonomic and a heater lever replaced the awkward knob of its predecessor.

Mechanically however, improvements were significant.

Engine choices were further reduced to only two (not including the Carrera models, which will be covered in a separate article). The sixty-horsepower, 1600cc Normal engine was out. In was the renamed seventy-five-horsepower 1600C, with a new higher-lift camshaft. Alternatively, the 1600cc Super 90 was dubbed the 1600SC and given smaller intake valves with larger exhaust valves, which helped to yield five more horsepower; for a total of ninety-five. The Ferral cylinder coating which had previously been used on the SC engine was replaced with a new, more economical Biral compound. Cylinders were comprised of a cast iron sleeve with a finned aluminum shell cast around it (similar to those of an air-cooled motorcycle engine). The finned design allowed for faster heat dissipation by slowing the air-flow as it swept across the fins. U.S. models were equipped with a new positive crankcase ventilation system, as well as reshaped intake ports which improved air-flow. 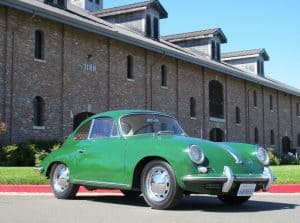 The final version of the Porsche 356 for sale was produced in 1965, even though a few were manufactured in the calendar year 1966. Changes for the final model were insignificant, as it is difficult to improve upon perfection.

The 356 began in 1947 with an idea, a makeshift aluminum body, and many of Volkswagen’s mechanical components. 1965 would see 356 production halt with vehicles that, despite the fact that many philosophies and designs were still similar to those of Volkswagen, were produced to exacting specification, using only Porsche parts, to meet the highest standard for quality of any automaker in the world.

Though not the most powerful of automobiles, Porsche 356C owners were known for their loyalty; Porsche 356C enthusiasts were mortified to discover that production would cease with the 1965 model year. The superior quality and dedicated craftsmanship afforded this popular sports car helped Porsche grow from an operation which could scarcely produce fifty vehicles in two-years (1948-1950) to an internationally recognized and highly respected automaker with the financial means and engineering capacity to manufacture and sell nearly ten-thousand units in 1964. It would not be an exaggeration to say that the Porsche 356C for sale had put Porsche on the map. Overall, nearly eighty-thousand 356s were produced from 1948 through 1966; half of those are believed to exist, today.