Porsche 356A For Sale – The Evolution

A year-by-year history of the Porsche 356A 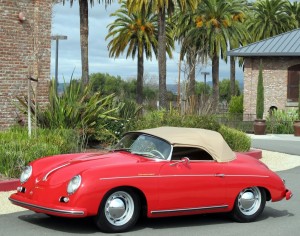 The 1955 Frankfurt Motor Show saw the introduction of the 1956 Porsche 356A for sale (internally known as the Type 1). With it comes a proclivity towards Porsche developing and manufacturing more of their own parts, and a departure from outsourcing from Volkswagen.  Subtle exterior changes in the Reuter supplied body of the coupe, Cabriolet, and Speedster models hinted at the hidden innovative performance enhancements, underneath. Notable body alterations included slimmer rocker rails and a curved windshield, which led to the elimination of the vertical roof crease. The Speedster got a taller windshield, which gave occupants added head room. Shorter, fatter tires and wheels also seemed to give the car a more athletic stance.

Major suspension refinements included more travel and a softer ride quality. Laminated spring leaves were removed from the front torsion bar suspension and rear swing arms were made longer, improving the car’s personality under strenuous driving conditions. The rear shocks were mounted vertically (previously angled up) and, like the front, were considerably stiffer. A thicker anti-sway bar and steering damper were added to improve steering feel and stability.  The classic Porsche 356A for sale became known for its exceptional handling and maneuverability.

The Type 1, affectionately known as the T-1 by enthusiasts, featured major interior improvements over the Pre A , as well. Sound deadening insulation reduced engine and road noise inside the T-1 and a starter neutral safety switch made it safer. Front legroom was increased by an inch-and-a-half and a new flatter padded dash with a radio mounting slot was added (except for the Speedster). Instrumentation consisted of a large tachometer, equal sized speedometer, and a smaller combination fuel level/engine oil temperature gauge. The handbrake was relocated, too.

The Porsche 356A for sale offered 5 choices of engines: 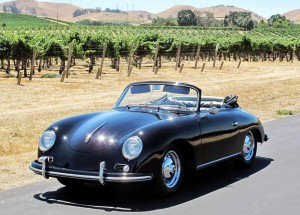 With Speedster sales figures beginning to decline, measures are put into place for its replacement. Work also continues on a new Type 2 prototype for the full 356 line. 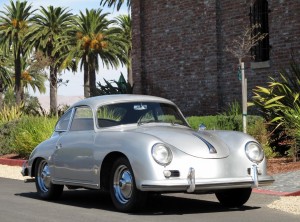 The Type 2 (T-2) saw several subtle developments and the last of the Speedster. Exterior improvements included a larger rear glass, for improved top-up visibility, in the Speedster and Cabriolet; with a removable fiber-glass hardtop as an available option beginning in 1957. The engine exhaust tips now extruded through the rear bumper guards on all models, license plate illumination moved from above the plate to below it, and the four round taillights were replaced with teardrop shaped lights. The 1300cc engine option was excluded and the 1600cc Normal engine was fitted with cheaper, quieter cast-iron cylinders. It also featured a larger steering wheel and Porsche emblems on the hubcaps. 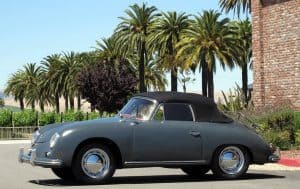 The Speedster is superseded by the Convertible D (for Drauz factory) and the 1956 Porsche 356B (Type 5) is unveiled at the Frankfurt Auto Show.