Porsche 356 Pre A For Sale- The beginning of an icon 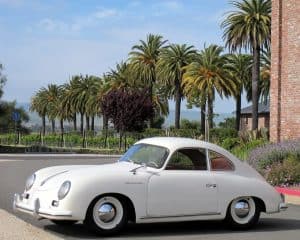 In the wake of World War II, with the brave people of Germany working tenaciously to regain stability, one of her displaced sons quietly concocted the design for a car which would shake the very foundation of the automotive world. With his father, and founder of what is now called Porsche Automobile Holding, mistakenly imprisoned (for nearly two years)  young Ferdinand “Ferry” Porsche designed what many consider to be the first Porsche automobile and the ancestor of European sports cars, as we know them today.

While “pre A” is not an official Porsche suffix, it helps to differentiate between the 356 and the 356 A, B. and C versions. The Pre A designation covers a period from 1948 through 1955; ending with the introduction of the Porsche 356A for sale in 1956.The most widely recognized method of differentiating between the Porsche 356 Pre A for sale and later models is by examining the windshield. Pre A model cars were designed with a bent windshield (either split or solid) and later models were equipped with a curved windshield design.

Only coupe and Cabriolet models were offered between the years of 1949 through 1953. The coupe is a two-door hardtop and the Cabriolet is basically a coupe with the hard-top removed, then fitted with a removable soft-top.

With automobile parts in short supply and an idea in his head, for a lightweight, air-cooled, four-cylinder rear-engine, rear-wheel driven sports car, Ferry Porsche joined forces with Porsche employee, Erwin Komenda, to produce the 356. Utilizing the engine, transmission, and suspension from an earlier collaboration with Volkswagen and Komenda’s aluminum unitized body module, Porsche began to painstakingly fabricate top-tier sports cars from a renovated sawmill in Gmund, Austria. The Porsche 356 was officially road certified on June 8, 1948.  Approximately fifty of these aluminum bodied were cars were manufactured in Gmund, between the years of 1948 and 1950.

Production of the Porsche 356 continued in Gmund, with Erwin Komenda overseeing body design and most of the mechanical components being outsourced from Volkswagen. The first classic Porsche 356 Cabriolet for sale was introduced in 1949. Komenda met Ferry Porsche when they were employed by Steyr-Diamler-Puch, an auto body manufacturer. Komenda’s innovative ideas regarding vehicle weight reduction earned him the post of Chief Engineer for Diamler-Benz in Sindelfingen, Germany; a post which he held until 1931when he went to work with Ferdinand Porsche. Among the highlights of Komenda’a tenure with Porsche were his work on the Volkswagen Beetle, the famous Auto Union and Cisitalia Grand Prix cars, the Porsche 560 Spyder and 911. In addition to his work with Porsche, Komenda is also credited with improving the design of Mercedes-Benz cars through weight reduction, and creating a streamlined monocoque Mercedes-Benz car. He remained the Chief Engineer for Porsche until his death in 1966.

The Porsche 356 production facility was relocated to Zuffenhausen, Germany in 1950, directly next-door to the Reutter coachworks. Vehicles manufactured in Zuffenhausen were steel bodied cars which were primarily equipped with Volkswagen engines, transmissions, and suspensions. The Porsche 356 for sale, though gaining a small but loyal following among racing enthusiasts, still remains relatively unnoticed in 1950.

The 1500 Super engine is introduced. It is an overhead valve, flat four-cylinder; still rear-mounted and air cooled. It had a Hirth crankshaft with roller style rod bearings and produced a whopping 70-horsepower.

Max Hoffman, a member of the Automobile Hall of Fame in New York, New York, USA, begins to import the Porsche 356 sports cars into the United States. He convinces foreign car dealers across the country to carry these high-end, sporty cars and acts as the sole importer to the U.S. Also, the split windshield design is replaced with the one-piece bent windshield.

Hoffman convinces Porsche executives to introduce a less expensive, stripped down version of their open car in the U.S. The 1954 Porsche 356 Speedster is born and quickly becomes a hit on the West Coast, where balmy weather and a sporting lifestyle are embraced. It takes hold and remains in production for the next five-years.

The 1600cc engine begins production, along with the optional four-cam 1500cc GS Carrera racing engine. The “A” version of the 356 is introduced with subtle changes in exterior appearance and interior amenities. Nearly half of all 356 models sold during this model run were open versions (Speedsters of Cabriolets).

Porsche 356 Pre A cars are some of the most sought after and valuable among classic car collectors today.